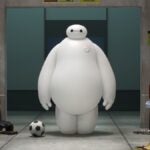 Disney+ has given us one other take a look at the upcoming “Large Hero 6” spinoff animated sequence “Baymax!”

Within the newest trailer for the sequence, which you’ll watch above, Hiro (Ryan Potter) wakes as much as notice that his pleasant robotic is nowhere to be discovered. It seems, Baymax (Scott Adsit) is roaming the town of San Fransokyo making an attempt to assist others.

As a medical companion robotic, Baymax usually seeks out individuals (and creatures) who’ve bodily illnesses, like a girl who sprains her ankle and one other who hurts her again. He additionally tries to save lots of a cat, which doesn’t go as deliberate when he tells the animal to “stay calm” and as a substitute it pokes a number of holes in his physique.

However, he quickly learns that a few of their issues go a lot deeper than the floor. “I assume a hero’s job isn’t finished,” Hiro says.

“I believed it could be enjoyable to do a Disney+ sequence with Baymax interacting with regular of us,” sequence creator Don Corridor, who additionally helmed 2014’s movie “Large Hero 6,” mentioned in a press release. “In every of our six episodes, Baymax simply needs to assist somebody—and numerous occasions they don’t need to be helped. He units out to repair a bodily concern that he’s recognized, and within the course of, will get to a deeper, extra emotional place and might be virtually transformative in that position.”